Rheumatic Heart Disease Endgame Strategy: what does it mean to community?

Across Australia, more than 5,000 Aboriginal and Torres Strait Islander people are currently living with rheumatic heart disease (RHD) or its precursor, acute rheumatic fever (ARF). Most at risk of developing the disease are young Aboriginal and Torres Strait Islander children aged 5-15, who are 55 times more likely to die of the disease than their non-Indigenous peers.

The RHD Endgame Strategy: the blueprint to eliminate rheumatic heart disease in Australia by 2031, was released in 2020. Produced by the End Rheumatic Heart Disease Centre of Research Excellence (END RHD CRE), based at Perth’s Telethon Kids Institute, with the backing of 25 leading health and research organisations the report clearly sets out the steps needed to eliminate the disease.

To explore what the Endgame Strategy recommendations would mean for communities living with RHD, the team worked with RHD Champions4Change. With support from RHD Australia, the Champions4Change program brings Aboriginal and Torres Strait Islander peoples and communities with the lived experience of ARF and RHD from across Australia together. The Champions support each other, advocate for ending RHD, create awareness in their communities and inform resource and program development.

Noeletta, is one of the 50 Champions4Change. A small group of Champions, including Noeletta, looked at what the five priority action areas of Endgame meant for community and how they should be communicated. The result is the Endgame Strategy community resources.

“RHD is a scary and unpredictable disease. Tackling RHD is a priority for our communities, but we need to do it in a culturally safe way.

"We as the people with a lived experience with RHD need a National Voice to Parliament, we need to make the decisions and direct the future of ending RHD in Australia. We live with it, we experience it and we know that it's an injustice in this country to have such a high rate of RHD. The Government needs to hear our voices and not make decisions about our communities without full consultation! We need much more and better equipped housing, we need RHD Health Workers and specialised programs, RHD resources and RHD local led decisions for our communities. Talk to us, we have the solutions. Fund us to make a difference,” said Noeletta.

With the release of the RHD Endgame community resources, the final output from the collaborative, community-driven END RHD CRE, the foundations have been laid to eliminate RHD in Australia.

Dr Rosemary Wyber, Head of Strategy, END RHD said RHD is entirely preventable and rare among non-Indigenous people, yet Aboriginal and Torres Strait Islander people have some of the highest rates of the disease in the world.

“This is a disease that is usually only seen in developing countries and its persistence in Australia is an ongoing injustice. We have the steps needed to eliminate the disease. We know exactly what needs to happen to prevent new cases and improve the quality of life for those already living with the disease,” said Dr Wyber.

“Together we can end RHD.”

Endgame Strategy: What it means for you

Endgame Strategy: What it means for you

END RHD is a community-driven collaboration between communities, clinicians, Aboriginal Community Controlled Health Organisations, and government and non-government organisations who have developed a blueprint to eliminate rheumatic heart disease (Endgame). A group of Champions4Change – a culturally safe program for people living with acute rheumatic fever (ARF) and RHD -- looked at how the priorities should be communicated with communities. The result is the Endgame community resources. 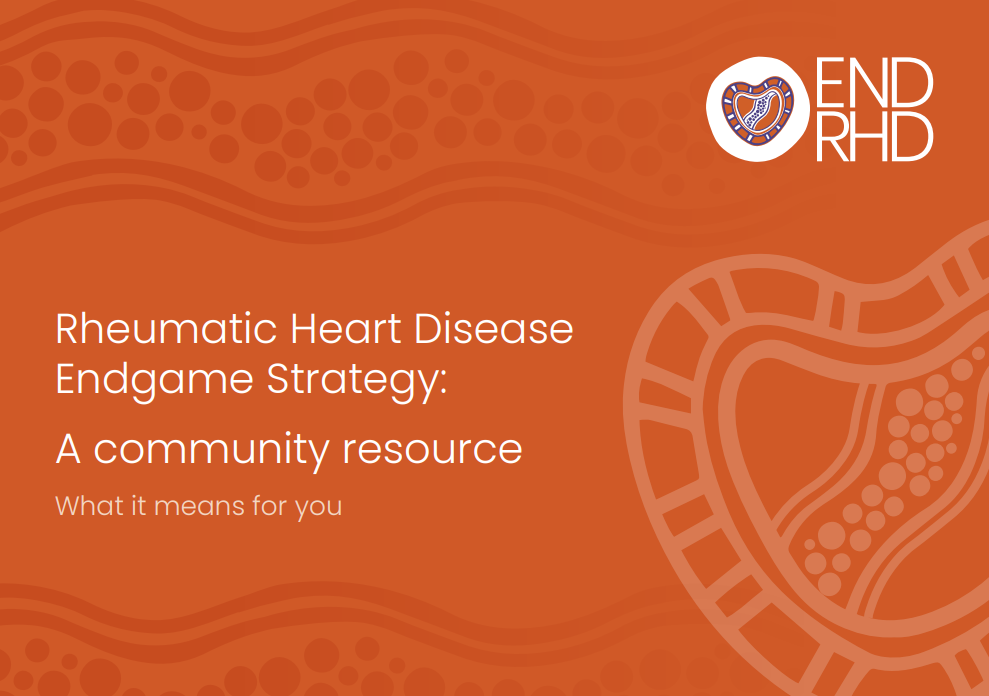