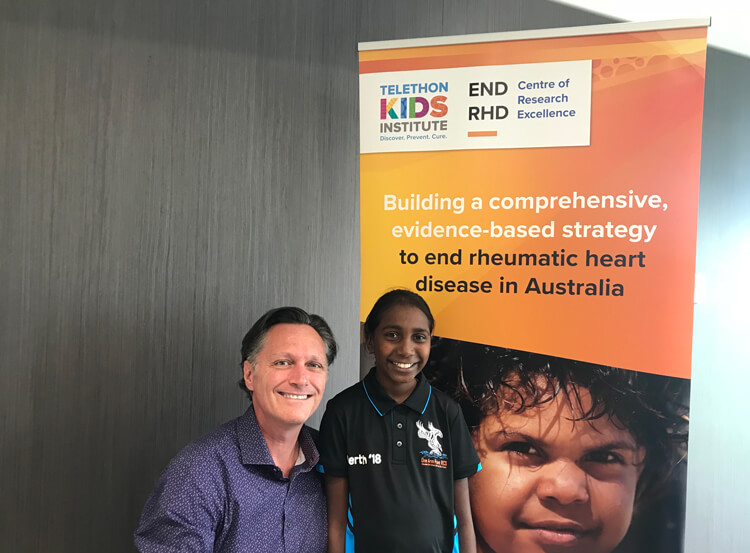 Laqueisha was just five years old when she was diagnosed with rheumatic heart disease and sent on a 5,000km return trip to Perth for major heart surgery.

Surgery is a scary prospect for anyone, but for a young child, it's especially terrifying.

Coming from a remote community, the idea of leaving friends and family and relocating to a hospital in the city for an unknown amount of time, made it even harder for Laqueisha.

Now aged ten, Laqueisha can still vividly recall her fear before being taken into surgery.

“When they put the mask on me, I was screaming. It was really hard to do it,” she says.

Despite being so young, Laqueisha remembers how troubling her diagnosis and surgery was for her whole family.

Fortunately, Laqueisha's surgery went well and she was able to return home.

However, having rheumatic heart disease has fundamentally altered the course of her life.

Like almost all kids living with RHD, Laqueisha must have a long-acting penicillin injection every 21-28 days, indefinitely, to ensure her condition does not deteriorate.

“The hardest part of living with rheumatic heart [disease] is to keep having the injections. It makes me feel really sad and sometimes mad. It’s really, really, hard,” she says.

Living with RHD means Laqueisha cannot be as active as her peers, and she struggles with not being able to do what other kids her age can.

“I can’t run, and I can’t be able to play basketball properly, which is my favourite sport,” she says.

But for someone who has gone through so much, Laqueisha is a bundle of energy. She is still only young, but she has already committed to a future of helping kids going through similar situations to her.

“My dream in the future is to become a nurse and to be able to help other kids. They might have the same thing as me. I want to be able to tell them how to make it easier for them,” she says.

But her ultimate dream is that, one day, RHD no longer affects kids like her.

This story originally appeared in 'The cost of inaction on rheumatic heart disease in Australia,' published by the END RHD CRE in December 2018. Read the report in full here.

For more than two decades, paediatrician and researcher Professor Jonathan Carapetis has been working on rheumatic heart disease. Great strides have been made but there is still a long way to go to help kids like Laqueisha. Diagnosed with RHD at five years of age, Laqueisha has undergone eight hours of heart surgery and will endure painful injections every month until she's 18.

We invite partners, collaborators, and institutions to join us as researchers, advocates, and colleagues in this work.

We’d love to hear suggestions of what you’d like to see prioritised in efforts to address RHD, or to provide feedback on any of our research projects.